Sulforaphane, chemical name is 1-isothiocyanate-4-methanesulfonyl butane, also known as “sulforaphane”, which is a common antioxidant and rich in broccoli, cabbage, broccoli, kale, carrots, and other cruciferous plants. Some research showed it is the vegetable found the best anti-cancer effect of the plant active substances, but also all of the natural anticancer substances, the most potent and effective active ingredients.

Sulforaphane plays a role in preventing cancer by activating transcription factor Nrf2, enhancing the body’s antioxidant capacity, and detoxifying chemicals. It can cause apoptosis and cell arrest of cancer cells, induce phase Ⅱ detoxifying enzymes in human body, inhibit the production of type Ⅰ enzymes, and eventually efflux harmful components such as carcinogens and free radicals through a variety of enzyme systems, at the same time, this component is a new anti-cancer component which does not remain in the human body and has no side effects on the body. Other studies have shown that sulforaphane may inhibit the growth of cancer stem cells. In conclusion, sulforaphane can induce apoptosis and static effect of cancer cells by regulating the early stage of cell carcinogenesis, and inhibit angiogenesis of cancer cells. It is effective to prevent and treat cancer by preventing the deterioration of cancer cells and inhibiting the metastasis and spread of cancer cells.

Relationship between thiosulfonate and disease 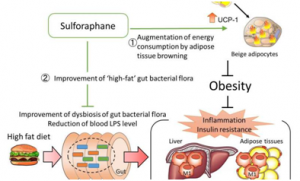 In a new study from Kanazawa University in Japan, the researchers compared the weight of mice who ate high-fat foods supplemented with sulforaphane and those who ate high-fat foods that did not contain sulforaphane. The study found that sulforaphane are expected to reduce inflammation in the liver or adipose tissue and reduce insulin resistance, as well as prevent lifestyle diseases. After assessing the effects of sulforaphane on obesity, reducing inflammation and insulin resistance, and its safety through future clinical studies, it may be recommended as an additional food product for improving bacterial flora in the gut. 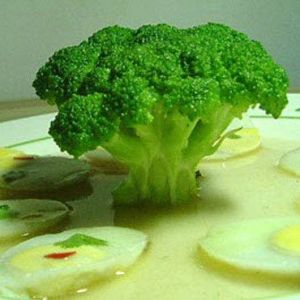 According to a study published in Science Translational Medicine on April 13, 2011, Researchers at the Bloomberg School of Public Health at Johns Hopkins University have developed a treatment based on nonsteroidal sulforaphane. It is used to enhance the innate immune defense of the lungs and reduce inflammation in order to treat possible problems in patients with chronic obstructive pulmonary disease (COPD). 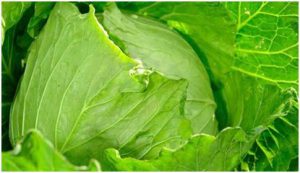 In July 2014, researchers found that sulforaphane inhibits a key molecule that causes inflammation and blocks enzymes that cause joint damage. Experiments show that feeding mice with sulforaphane-rich foods can effectively reduce cartilage damage in mice, which are significantly less likely to develop osteoarthritis than those who do not. In addition, sulforaphane may play a role in the initiation of carcinogens, mutating genes in the early stages of cancer formation, and some inhibitory enzymes that double-block or suppress cancer and degrade toxic substances. As a result, it has an anti-cancer effect. At the same time, sulforaphane can also inhibit the production of Phase Ⅱ enzyme, such as reducing the level of P450 enzyme or inhibiting its catalytic activity, thus affecting the formation of active carcinogenic end products. By destroying the active centers of carcinogens or combining them with endogenous ligands, they can be quickly expelled from the body to play an anti-cancer role.