PT-141, also called as Bremelanotide, is a derivative for Melanotan 2 (M2). Unlike M2, PT-141 lacks C-terminal amide molecules. PT-141, a synthetic cyclic hepta-peptide lactam derivative of alpha-Melanocyte-stimulating hormone (alpha-MSH), is an agonist at melanocortin receptors including the MC3R and MC4R, which are expressed primarily in the central nervous system. Melanocortin receptors&ampnbspare members of the&ampnbsprhodopsin&ampnbspfamily of 7-transmembrane&ampnbspG protein-coupled receptors. There are five known members of the melanocortin receptor system&ampnbspeach with differing specificities for&ampnbspmelanocortins: MC1R; MC2R; MC3R; MC4R; MC5R. 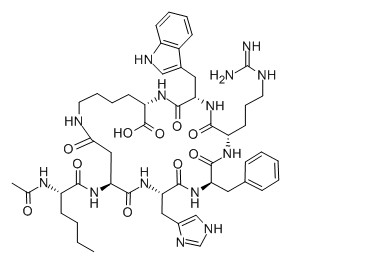 PT-141 was developed from the&ampnbsppeptide hormone&ampnbspmelanotan II&ampnbspwhich underwent testing as a&ampnbspsunless tanning agent. Sunless tanning, also known as&ampnbspUV-free tanning,&ampnbspself tanning,&ampnbspspray tanning&ampnbsp(when applied&ampnbsptopically), or&ampnbspfake tanning, refers to the application of chemicals to the skin to produce an effect similar in appearance to a&ampnbspsuntan. In initial testing, melanotan II did induce the production of darkening dermal pigmentation (melanogenesis) but additionally caused&ampnbspsexual arousal&ampnbspand&ampnbspspontaneous erections&ampnbspas unexpected&ampnbspside effects&ampnbspin nine out of the ten original male volunteer test subjects. Due to this potential, PT-141 is being studied as a potential treatment for sexual disorders such as erectile disorders in men and sexual arousal disorders in women, especially Hypoactive sexual desire disorder&ampnbsp(HSDD) and female sexual interest/arousal disorder (FSIAD). However, reports of elevated blood pressures halted the trial.
Hypoactive sexual desire disorder&ampnbsp(HSDD) or&ampnbspinhibited sexual desire&ampnbsp(ISD) is considered a&ampnbspsexual dysfunction&ampnbspand is characterized as a lack or absence of&ampnbspsexual fantasies&ampnbspand&ampnbspdesire for sexual activity, as judged by a clinician.&ampnbspFemale sexual arousal disorder&ampnbsp(FSAD) is a disorder characterized by a persistent or recurrent inability to attain&ampnbspsexual arousal&ampnbspor to maintain arousal until the completion of a&ampnbspsexual activity.&ampnbspPT-141 is the&ampnbsponly synthetic aphrodisiac. Unlike Viagra and other related medications (PDE5 inhibitors), PT-141 does not act upon the vascular system, but directly through the nervous system (hypothalamus) to increase desire. Viagra, Cials and Levitra are not considered aphrodisiacs as they do not have any direct effect on the libido. However, treatment with PDE5 inhibitors and PT-141 are known to have a synergistic effect.&ampnbsp

In a phase 2B trial, PT-141 was reformulated as a lower dose, subcutaneous injection to measure efficacy for HSDD and/or FSAD treatment in premenopausal women. In a 4-week at-home trial, 1.75 mg PT-141 showed statistically significant improvements as compared with placebo in five measures of FSD: number of satisfying sexual events per month, total and sexual domain scores on the FSFI, and total and desire domain scores on the FSDS. PT-141 was associated with minimal and transient increases in blood pressure (~3 mmHg) that were limited to the first four hours after administration. Protocol-defined blood pressure withdrawal criteria were not met at higher frequency in PT-141-treated subjects than in those taking placebo. Further studies on PT-141 dosing have suggested optimal increases in arousal, desire, and satisfaction with sexual events with 1.25 and 1.75 mg subcutaneous injections. At these doses, adverse events included nausea (22 % and 24 %, respectively), placebo 3 %; flushing (14 % and 17 %, respectively), placebo 0 %; and headache (9 % and 14 %, respectively), placebo 3 %. MC3R and MCR4 receptors are involved in many physiological systems and there may be theoretical risks of activating these receptors. The long-term effects of BMT are unknown.