Peptides can be synthesized without amino acids

Amide bond formation is one of the most important reactions in chemistry and biology, but there is no chemical way to achieve α-peptide ligation in water without using all 20 amino acids. The general genetic code determines that the biological role of peptides predates the last common ancestor of life, and peptides play an important role in the origin of life. The important role of sulfur in the citric acid cycle, non-ribosomal peptide synthesis, and polyketone biosynthesis indicates that thioester-dependent peptide-binding occurs earlier than RNA-dependent protein synthesis in the process of life evolution. However, no one has confirmed the robust mechanism of aminoacyl thioester formation.

In a new study, researchers from University College London, UK, reported a chemoselective, high-yield α-amino nitrile link. This α-amino nitrile connection only uses the molecules that may exist before the origin of life-hydrogen sulfide, thioacetate, ferricyanide or cyanoacetylene to produce α-peptides in water. The results of the study, entitled “Peptide ligation by chemoselective aminonitrile coupling in the water”, were published online in the journal Nature on July 10, 2019. 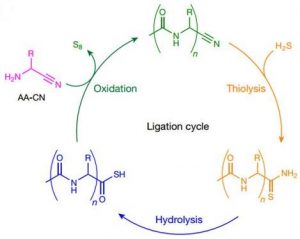 “Peptides are long chains of amino acids that are a key element of all life on Earth,” explained Professor Matthew Powner of University College London, who led the study, “they can further form proteins. In charge of the biological process. “Although scientists have clarified the relationship between amino acids, peptides, and proteins, a key question about the origin of life has never been solved: the synthesis of peptides from amino acids requires the involvement of enzymes; The enzyme that dominates this step is a protein; but to synthesize this protein, we need amino acids to synthesize peptides first. “This is a classic ‘chicken first or egg first’ question.” Professor Powner added.

Previously, many scientists have been studying how amino acids spontaneously form peptides. However, the conditions required for the reaction are extremely harsh and difficult to achieve. In the study, the team focused on aminonitriles, the precursor of amino acids. They found that these molecules are inherently reactive and can directly form peptides without first converting them into amino acids. In other words, the researchers have found a way to synthesize peptides without the need for amino acids.

This model unifies the synthesis of amino nitrile and biological α-peptide before the origin of life, and points out that the shorter N-acyl peptide nitrile is a potentially feasible substrate in the process of early evolution.