Recently, Inotrem S.A. announced that the US Food and Drug Administration (FDA) has granted nangibotide (LR12) Fast Track designation (FTD) for the treatment of septic shock. Septic shock is the ultimate complication of sepsis. In developed countries, the incidence of septic shock continues to rise and mortality remains high (35%). In addition to antibiotics and symptomatic treatment, there are currently no specific drugs approved for this indication. Nangibotide has the potential to be the first mechanism-based septic shock treatment. The drug is a TREM-1 inhibitor with the potential to restore proper inflammatory response, vascular function and improve survival after septic shock.

The innate immune system constitutes the first line of defense against invading microbial pathogens. TREM-1 (a trigger receptor expressed on myeloid cell-1) is an immunoreceptor expressed on innate immune cells. TREM-1 regulates inflammation and leads to a vigorous immune response. Unlike most inhibitors, TREM-1 based inhibitors have unique therapeutic capabilities. The ability to use immunomodulation can control the cause of the harmful effects observed by the patient, but does not completely eliminate the inflammatory response. Because inflammatory reactions are still necessary, such as for bacterial clearance. 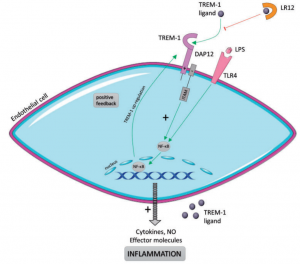 Inotrem found that the TREM-1 pathway is a key factor leading to an imbalance in the inflammatory response. The company has developed an innovative individualized medical approach based on TREM-1 inhibition for indications characterized by acute or chronic inflammatory syndrome. The reported study was an 11-month multicenter Phase IIa clinical trial in which 49 septic shock patients were enrolled in four European countries (Belgium, France, the Netherlands, and Spain). These results provide positive data on the safety and tolerability of Inorem’s primary candidate, nangibotide, in patients with septic shock. Studies have also shown that nangibotide treatment provides a consistent trend for more favorable biological and clinical activity marker evolution in subpopulations of patients with soluble TREM-1 levels above the median value. These results support Inotrem’s personalized medical approach: using soluble TREM-1 levels in the blood as potential biomarkers for identifying patients most likely to benefit from cystic peptide therapy. The results of this clinical trial reinforce previous preclinical and clinical findings, particularly regarding the safety, biological and clinical activity of cyst peptides and the use of sTREM-1 as a companion biomarker for patient selection.

Nangibotide is a preparation of the active ingredient LR12, and LR12 is a chemically synthesized peptide of 12 amino acids in length. LR12 is a specific TREM-1 inhibitor that acts as a decoy receptor and interferes with the binding of TREM-1 to its ligand. In the preclinical septic shock model, nangibotide is able to restore proper inflammatory response, vascular function, and improve survival after septic shock in animals.