Cells are a key part of our immune system and play a key role in protecting us from harmful pathogens such as viruses and bacteria, as well as cancer. The more we know about how they recognize, act on, and even kill infected cells or cancer cells, the closer we can be to developing drugs and treatments for various diseases. T cells are important guardians of the immune system and are active in the front line of fighting pathogens. Not only do they protect us from bacteria and viruses, they can also effectively attack cancer cells. Therefore, if we can figure out how these cells recognize dangerous molecules in the body, it is expected to bring us better anti-infection or anti-cancer therapies. 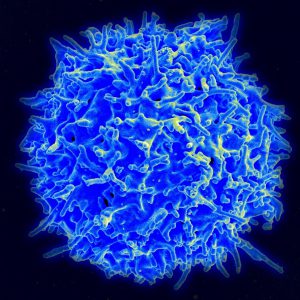 In the current mainstream model, T cells identify potential threats through surface “T cell receptors” (TCR). For example, when viruses and bacteria infect the human body, specific proteins on their surfaces are loaded into a structure called the major histocompatibility complex (MHC) for T cells to recognize. In the past, we know a lot about αβ T cell receptors. It is believed that T cell receptors will bind to MHC or MHC-like molecules in a head-to-head manner, thereby recognizing specific signals from pathogens. In this study, the scientists focused on γδ T cell receptors, a relative of these receptors.

In this new study, the researchers describe a cell population in a class of little-known T cells called γδT cells that recognizes an MHC-like molecule called MR1. Using high-intensity X-ray beams on a synchrotron in Australia, they obtained detailed three-dimensional images of the interaction between γδT cell receptors and MR1, and got interesting results: γδT cell receptors bind under MHC-like molecules for recognition. Dr. Jérôme Le Nours, one of the co-first authors of the study, made a very vivid metaphor: “Imagine that (MHC molecule) is like a flag standing on a cell. We always think the t-cells are sitting on top of the flagpole, reading the message. But what we found is that some t-cells bind to the bottom first.”

These are important details that can change our approach to studying T cell biology in the future. This is important because T cells are a key weapon of our immune system, and understanding how T cells target and act on other cells is critical to using their power to develop immunotherapies that treat diseases such as infections and cancer. Researchers believe that this unusual recognition system is expected to help us understand how TCR binds to target molecules. Given that T cells are an important weapon in the body’s fight against disease, these insights are expected to lead to more effective therapies. Because γδ T cells also play a role in fighting cancer, the existing anti-cancer immunotherapy has the opportunity to be further enhanced.

Dr Nicholas Gherardin, co-first author of the paper and the Doherty Institute at the University of Melbourne, said: “Our research indicates that MR1 is a novel molecular target for γδT cells. These cells play a decisive role in the immune response against infection and cancer, but little is known about how they respond. MR1 may signal γδT cells to indicate the presence of viruses or cancer cells and trigger these cells to trigger a protective immune response. ” Researchers will dig deeper into this mechanism and strive to apply it to the treatment of diseases.