MHC-peptide tetramer and its application

Antigen-specific cytotoxic T lymphocytes (CTL) kill target cells by recognizing the antigen peptides bound to major histocompatibility antigen (MHC)-I molecules on the cell surface. It is one of the body’s important immune defense responses for anti-tumor, anti-graft and effective control of various infections. The MHC peptide tetramer composed of human leukocyte antigen (HLA) heavy chain and β2 microglobulin light chain, antigen peptide and dye-labeled connexin, has the characteristics of high sensitivity, specificity and efficiency. By using MHC-peptide tetramers, we can not only directly count antigen-specific T cells, but also analyze their phenotype and function, which greatly improves our understanding of the role of antigen-specific CTL in diseases. 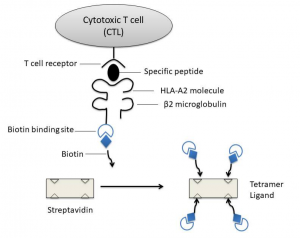 Major histocompatibility antigens are glycoproteins located on the surface of cells. They are highly polymorphic and are antigen-presenting molecules that play a key role in immune response. The antigens that antigen-specific CTLs can recognize are mainly peptides derived from endogenous proteins and bound to MHC-I molecules. MHC-I molecules are heterodimers composed of a highly polymorphic heavy chain and a conservative light chain, β2 microglobulin [3], which are expressed in all nucleated cells. Antigen short peptides that are usually combined with MHC-I molecules are synthesized in antigen presenting cells (APC) (endogenous antigen) and binds in the peptide binding groove formed by the α1 and α2 functional regions of the heavy chain of MHC-I molecules in the endoplasmic reticulum of the cell. Subsequently, due to the non-covalent binding of β2 microglobulin to the heavy chain, MHC-I peptide complexes are more stable, and they are finally located on the cell surface. By interacting with the αβ T cell receptor (TCR) on the surface of CD8+ antigen-specific CTLs, CTLs are activated to kill infected cells.

The basic principle is similar to the construction of MHC-I peptide tetramer. The two heavy chains of the modified MHC-II molecules are synthesized in vitro, biotinylated, and reacted with avidin to form tetramers.

Used for the secretion and release of a specific cytokine, such as detecting the amount of secreted TNF-α to reflect the killing activity of the CTLs to be tested; or performing a cytotoxicity test to directly observe the killing function of the cell. Although this sorting of cells can also be done by magnetic beads, the use of tetramers is more economical, simple and straightforward.