Some of the deadliest animals on earth are toxic. Poison is their deadly weapon to defend themselves or attack. Toxins are injected into the skin and become poison. There are hundreds of deadly subcutaneous syringes in nature. But humans have a long history of converting some of the most toxic substances on the planet into useful and even life-saving drugs, such as botulinum toxin, which is 1g enough to kill one million people. But by paralyzing the facial muscles, it can remove some wrinkles, and its effect is not limited to that. In fact, Botox was first used in the treatment of eye diseases, such as crossed eyes and eyelid convulsions, and is now used to prevent migraines. It is just one of many terrible substances that have been fully utilized. Scientists are increasingly turning the deadliest substances in the animal kingdom into drugs that work well with very small amounts, in other words, they are ideal drugs. Compared with other toxins, the molecular weight of animal toxin polypeptide is small, has high specificity and molecular diversity, is directly encoded by genes, low dose but strong toxicity, and is the key physiological component acting on the target organism. Therefore, animal toxin peptides as natural resources for drug development have been highly valued, a large number of drugs from animal toxin peptides have been approved by FDA, and some polypeptide drugs from animal toxins are in the clinical trial stage.

Snake venom is a mixture of enzyme and non-enzyme protein or peptide. Many drugs derived from snake toxin peptide have been used in clinical treatment.

A pentapeptide compound, which is an enhancer of bradykinin, was extracted from the venom of Agkistrodon halys Bothrops jaracaca. The structure of the pentapeptide was cut and the minimum pharmacophore Ala-Pro dipeptide was modified to synthesize an oral drug “captopril”. Captopril reduces blood pressure by increasing bradykinin activity and inhibiting thrombin (ACE). Captopril is a routine drug for the treatment of hypertension. In order to modify the structure of captopril, enalapril, lisinopril, Ramipril, and fosinopril were developed. 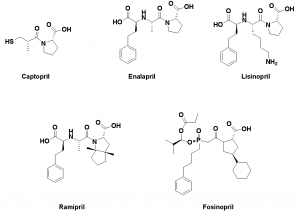 It was found that chlorotoxin peptides in scorpion Leiurus quinquestriatus venom could delay the activity of human glioma cells in vitro. The venom of Venezuelan scorpion Tityus dispans, which has antibacterial and antiparasitic activity, can inhibit the growth of Leishmania in vitro. The toxin protein Bengalin of Indian scorpion can induce apoptosis of human leukemia cells in vitro and improve the biochemical indexes of osteoporosis in female rats. The α-neurotoxin found in scorpion venom can delay the inactivation of sodium channel at the neuromuscular junction, and the inactivation of the sodium channel may enhance neuromuscular reflex and airway contraction, which can treat sleep apnea theoretically.

Sea anemone is one of the oldest poisonous animals in existence. Like other members of the phylum, sea anemones have many special thorn cells and are widely distributed throughout the body. ShK toxin isolated from anemone is an effective Kv1.3 channel blocker. Kv1.3 channel plays an important role in the activation (proliferation and cytokine production) of human effector memory T cells. ShK can treat T-cell-mediated autoimmune diseases. Such as multiple sclerosis and rheumatoid arthritis. Kv1.3 receptor blockers are also considered to be targets for the treatment of obesity. ShK toxin also has potential applications in the treatment of obesity and insulin resistance. ShK-186, an analog of ShK toxin, now known as Dalazatide, has successfully completed clinical trials and entered the drug market for the treatment of autoimmune diseases.

Leech is an important traditional medicine, which has many functions in the treatment of cerebral hemorrhage and other thrombus-related diseases. Hirudin is an effective anticoagulant in the salivary gland of leeches. Hirudin can inhibit the formation of thrombus and prevent the clotting of host blood. Pharmacological studies have shown that hirudin has the functions of anticoagulation, antithrombus, anti-atherosclerosis, anti-platelet aggregation, anti-tumor, and anti-inflammation, improving hemorheology and protecting the cerebral ischemia-reperfusion injury.