Among the variety of post-translational modifications (PTMs), the disulfide bond has gained considerable momentum in biological chemistry as it occurs instantaneously through oxidative folding in peptides, proteins, hormones, enzymes, growth factors, toxins, and immunoglobulins. But the use of disulfide-rich cyclic peptides is faced with some synthetic challenges, mainly associated with construction of the circular backbone and formation of the correct disulfides. 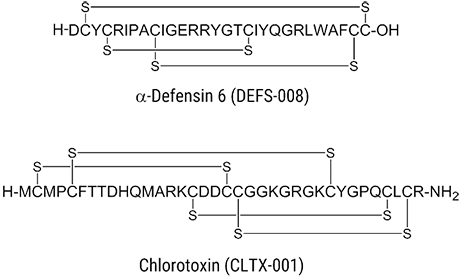 Fig.1 The structure of two disulfide-rich peptides: α-Defensin 6 and Chlorotoxin

Disulfide-rich cyclic peptides and their disulfide bonds often have the following advantages:

Cyclic peptide synthesis has proven to be useful for several applications:

Among 20 kinds of amino acids, cysteines greatly contribute to the stabilization of the conformation by forming covalent disulfide bonds. The artificial formation of disulfide bridges requires the proper management of cysteine residues, including first protecting and then later removing side groups and properly pairing the cysteine residues. Cysteine is the prevailing site for covalent PTM in peptides and proteins.