The first AMP was found by Dubos when extracted an antimicrobial agent from a soil bacillus strain in 1939. This extract was demonstrated to protect mice from pneumococci infection. Since then nearly 5,000 AMPs have been found or synthesized. They usually have the common characteristics: small peptide (30–60 aa), strong cationic (pI 8.9–10.7), heat-stable (100℃, 15 min), no drug fastness and no effect on eukaryotic cell. Almost all of them have a positively charged surface. The selective interaction with the membrane of microorganisms generally depends on the cationic nature of AMPs. According to their charge they can be divided into cationic peptides and non-cationic peptides. The largest group corresponds to cationic peptides, which is divided in the following three classes:

Other groups of AMPs are described as non-cationic peptides and are also an important part of the innate immune system.

Mechanism of Action of Antimicrobial Peptides

Currently, several complex and controversial mechanisms of action exist as to how AMPs disrupt the bacterial cell membrane. The four popular models are the carpet model, the toroidal pore model the barrel-stave model and the aggregate model. A growing body of evidence suggested that AMPs had other mechanisms along with membrane penetration and pore formation. (Fig 1). 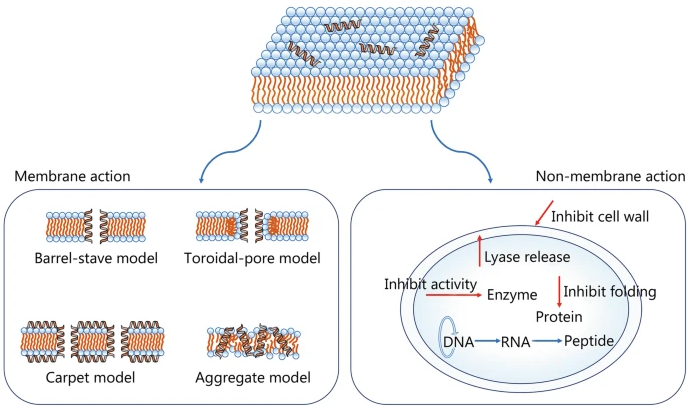 Most AMPs act by provoking an increase in plasma membrane permeability. First step in the mechanism of membrane permeabilization is the electrostatic interaction between the positively charged AMP with the negatively charged membrane surface of the microorganism. Subsequent disruption of the membrane by creation of pores within the microbial membrane ultimately results in cell death of the organism due to leakage of ions, metabolites, cessation of membrane-coupled respiration, and biosynthesis. The mechanics of AMPs represent an unusual source for the targeted exploration of new applications in the therapy of microbial and viral infection, cancer, and sepsis.

AMPs damage microorganisms mostly by membrane disruption, making it difficult for microorganisms to develop resistance and also make itself more popular in pharmacology. Antimicrobial peptides can not induce the production of resistant bacteria, and it also inhibits the production of harmful cytokines induced by bacterial products. Therefore, they can be used to prepare antibacterial and anti-viral drugs. In addition, antimicrobial peptides can also be used as drug carriers.

Antimicrobial peptides can be used as potential alternatives to chemical pesticides. Besides, AMPs have been widely studied for producing transgenic plants resistant to microbial diseases.

Some studies show AMPs as feed additives have remarkable effects compared with the traditional antibiotics.

We offer the many antimicrobial peptides services:

Creative Peptides can offer a wide range of AMPs to fully support your project.

Antazoline is a drug used in the treatment of atrial fibrillation (AF), and its formula is C17H19N3. In fact, th ...

Function of a vasoactive peptide Endothelin-1

Endothelin-1 (ET-1) is a vasoactive peptide containing 21 amino acids, which was first isolated from the culture ...

What is abaloparatide? Abaloparatide (formerly known as BA058) is an investigational analog of human PTHrP (1-34) being devel ...

Peptidic Antagonist to CRF2 Receptor–Astressin 2B

Astressin 2B is a peptidic antagonist to CRF2 (corticotrophin-releasing factor 2) receptor with structure of cyc ...