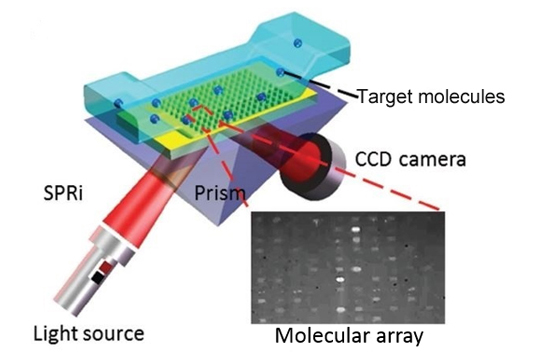 Surface Plasmon Resonance (SPR) is an optical detection process that occurs when a polarized light hits a prism covered by a thin planar metal (typically gold or silver) layer. At certain angles of incidence, a portion of the light energy couples through the gold coating and creates a surface plasmon wave at the sample and gold surface interface. The angle of incident light required to sustain the surface plasmon wave is very sensitive to changes in refractive index at the surface (due to mass change), and it is these changes that are used to monitor the association and dissociation of biomolecules.

Kinetic characterization by Surface Plasmon Resonance and other methods has already been an important step for drug researchers to select and characterize novel therapeutics as well as for basic life scientists to investigate specific biological binding events. When combined with appropriate surface chemistry, microfluidics and software, SPRi is unmatched in its range of applications including:

As for our clients, all you need to do is just tell us the essential details of the experiment, and then our scientists will provide a comprehensive solution to match their scenario. At the end of the service they will get the result of the SPRi and the full experiment data.