Peptide-based targeting vectors are becoming increasingly popular for diagnostic and therapeutic applications. They offer several advantages over antibodies including more favorable pharmacokinetics and better tumor penetration. Peptide sequences that are capable of binding to their target with affinities comparable to those of monoclonal antibodies can be generated by chemical or phage display libraries. Affinity selection of random phage display peptide libraries is a very powerful way of identifying novel targeting sequences for a receptor from billions of peptides.

Among many ligands, the macrocyclic 1,4,7,10-tetraazacyclododecane-1,4,7,10-tetraacetic acid (DOTA) stands out, as it forms complexes with Ln(III) ions with extraordinary thermodynamic stability and kinetic inertness. It should be emphasized that DOTA complexes are significantly more inert kinetically than chelates of DTPA, and although both DOTA and DTPA complexes have been used as imaging agents and radiopharmaceuticals, DTPA complexes have been shown to dissociate and release metal under physiological conditions. This may not be of concern in the case of an MRI exam with Gd-DTPA when clearance of the contrast agent is rapid, but for targeted radiopharmaceutical applications, when the clearance of the complex is slow, DOTA and not DTPA should be the ligand of choice. 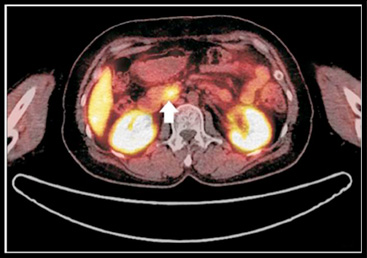 The DOTATOC for scanning

DOTA is an organic compound and commonly used as a complexing agent, which has been widely used as contrast agent for cancer treatments. It can also be linked to molecules that have affinity to various structures (e.g. somatostatin receptors on neuroendocrine tumours). The generated compounds may combine with a number of radioisotopes to be used in cancer therapy and diagnosis. Complexes of DOTA peptides, depending on the metal ion, have found applications in three major areas: magnetic resonance imaging [GdIII), Eu(III)], nuclear imaging [111In(III), 68Ga(III), 64/67Cu(II)], and therapeutic radiopharmaceuticals [90Y(III), 177Lu(III)].

For example, DOTA could act as a chelator for a radionuclide. (Tyr3)-octreotate, a derivative of octreotide, can bind to somatostatin receptors that are found on the cell surfaces of a number of neuroendocrine tumours. Therefore, DOTA-(Tyr3)-Octreotate is able to direct the radioactivity into the tumour.

Function of ecallantide in hereditary angioedema

Function of Tetracosactide in Adrenal Insufficiency

Tetracosactide (also known as Tetracosactide) is a synthetic peptide that is identical to the 24-amino acid segm ...

KAI-1455, a ε-protein kinase C activator in Phase I testing for the treatment of ischemia-induced reperfusion i ...

Application of ZIP to block the constitutive activity of PKMζ

Long-term potentiation (LTP) is a persistent synaptic enhancement which is thought to be a substrate for memory. ...