Alzheimer's disease (AD) currently presents one of the biggest healthcare issues in the developed countries. It is a progressive neurodegenerative disease and causes a complex multi-factorial disorder among the elderly (typically after the age of 65 years). Although five drugs have been approved by the U.S. Food and Drug Administration (FDA) for the treatment, these drugs are not capable of slowing down disease progression but only are used to relieve symptoms. 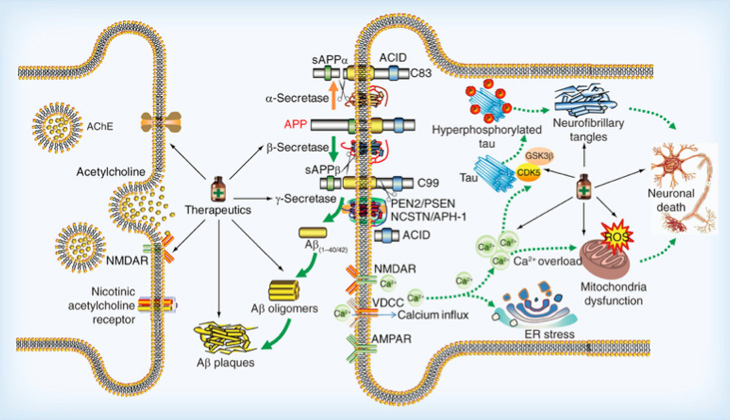 Aβ peptides are generated through the proteolytic cleavage of amyloid precursor protein (APP), a transmembrane protein, by enzyme complexes α, β and γ-secretases. In 1991, the amyloid hypothesis postulated that extracellular amyloid beta (Aβ) deposition is the basic cause of the Alzheimer disease. Specifically, this hypothesis suggests that the formation, aggregation, and deposition of Aβ peptides, and especially Aβ (1-42), is a fundamental process in AD pathogenesis which causes neurotoxicity and neurodegeneration. Based on the amyloid hypothesis, drugs that can reduce the generation of Aβ, prevent the aggregation of Aβ, and promote its clearance are thought to be promising therapeutics for AD.

Tau proteins are highly soluble and abundant in the neurons where they play a critical role in microtubule stabilization. In this hypothesis, hyperphosphorylated tau begins to pair with other threads of tau. Eventually, they form neurofibrillary tangles inside nerve cell bodies. When this occurs, the microtubules disintegrate, destroying the structure of the cell's cytoskeleton. This may eventually causes neurodegeneration and neuronaldeath. In recent years, immunomodulation was suggested as a viable option for promoting effective clearance of Tau aggregates.

The tau protein contains 85 potential serine (S), threonine (T), and tyrosine (Y) phosphorylation sites, and under normal conditions phosphorylation helps to maintain cytoskeletal structure. Abnormal phosphorylation of tau is known to contribute to AD pathology, with approximately 45 specific phosphorylation sites identified in the AD brain. Tau is subject to multiple post-translational modifications in addition to phosphorylation, including glycosylation, oxidation and aggregation etc. Today, there is a worldwide effort under way to find better ways to treat the disease, delay its onset, and prevent it from developing.

With long-standing experience of peptide synthesis, Creative Peptides can offer most comprehensive AD related peptides, from milligram to kilogram quantities at predefined purity levels even GMP grade peptides, for worldwide clients. Many experts working in Creative Peptides have actively pursued complicated peptide design and manufacturing for more than a decade. Consequently, our experts are skilled in complex peptide synthesis, even sophisticated peptide modifications such as glycosylation, DOTA, phosphorylation etc.

Please kindly check list below for the AD related peptides from Creative Peptides. If you have any custom peptide services requirement in mind, please contact us. We will be more than happy to serve you.

Trimetazidine is a partial fatty acid oxidation inhibitor that inhibits 3-ketoacyl CoA thiolase, one of the enzymes of fatty ...

Function of lepirudin in heparin-induced thrombocytopenia

Developed by the German company Hoechst Marion Roussel and derived from genetic modification of hirudin, lepirud ...

Function of Urantide in the Rat Aorta