PNAs, or peptide nucleic acids, is an analogue of oligonucleotide in which sugar-phosphate backbone has been replaced by a polyamide chain. Due to the unique backbone of PNA, it can be used in same applications as conventional DNA/RNA. Comparing with DNA, PNAs are neutral in charge, chemically more stable and resistant to DNases and proteases, as well as remaining high sequence specificity, binding activity and lower salt sensitivity. PNAs have been widely used in molecular diagnostics and therapeutics, such as fluorescent in situ hybridization (Fish), single nucleotide polymorphisms (SNPs) detection and antisense therapy. 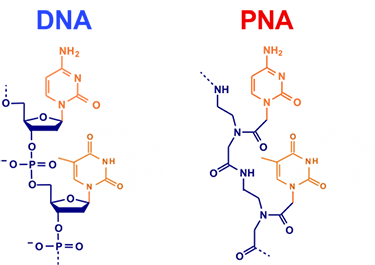 Creative Peptides can provide a number of PNA related products, such as Gamma PNA or Fmoc Monomers etc., which are commonly and widely used in below listed areas.

•PCR Blockers — PNA probes have no direct interaction with DNA polymerase but PNAs can terminate the elongation of oligonucleotide primers by binding to the template or competing with the primers. Moreover, PNA–DNA chimeras can be recognized by the DNA polymerase and can thus be used as primers for PCR reactions. The high affinity binding of PNAs has also been used for detecting single base pair mutations by PCR. This strategy, named PNA directed PCR clamping, uses PNAs to inhibit the amplification of a specific target by direct competition of the PNA targeted against one of the PCR primer sites and the conventional PCR primer.

•PNA miRNA Inhibitors — Compare to DNA/RNA, PNA has more strongly affinity when bind to complementary RNA. The character make PNA can be used as a miRNA inhibitors. Moreover, PNA miRNA inhibitors are conjugated to cell penetrating peptide (CPP), allowing them enter to cells without the need of transfection reagents.

Creative Peptides synthesizes PNA by automated solid-phase methods, as with DNA and RNA oligonucleotide synthesis. The mechanism of PNA synthesis has much in common with solid-phase peptide synthesis. Creative Peptides has rich experience in research and manufacture of PNA and their analogue, including customized PNA synthesis and PNA analog synthesis service. With more than a decade of peptide service allows us to offer the highest level of quality control over the synthesis of every custom ordered product. In the meantime, the expertise of our scientists also makes fast turn around and the best customer support available.