De novo design is an attractive approach for constructing designed peptides with predetermined structures and functions. Creative Peptides provides de novo design related services for peptides engineering, including peptides structure prediction, peptides folding and interactions, thermodynamics information, energetic state, stability, etc. De novo design requires deep understanding of the structure of a peptide and the correlated functions. It is accomplished either from scratch or by the modular approach. 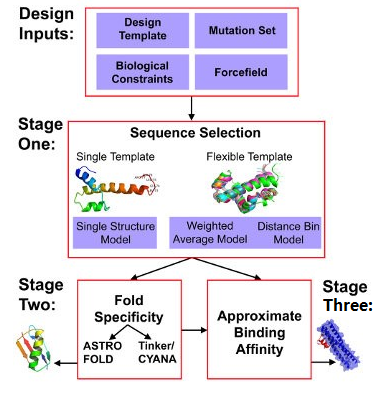 • Stage I: Sequence Selection
Stage I is an optimization-based sequence selection stage, which uses biologically relevant constraints in an integer linear optimization model to produce a rank ordered list of sequences with the lowest potential energy in a given template structure. In peptides, sequence similarity implies structural similarity. Accordingly, the method of comparative modeling is formed. The structure of a peptide can be predicted by comparing the amino acid sequence to that of native 3D structure known. When the target and template share over 50% of sequence, the predictions are of high quality. Sequence similarity implies structural similarity but similar structures can be found for peptides with different sequence.

• Stage II: Fold Specificity
The second stage takes the top sequences from the sequence selection stage and determines the specificity that the candidate sequences have for the target peptide template structure. As a complemental method, fold recognition aims at predicting the three-dimensional folded structure of a peptide with known sequence. The structure is evolutionary more conserved than sequence. As a result, the repertoire of different folds is more limited. The methods of fold recognition mainly include advances sequence comparison and secondary structure prediction and comparison. Besides these, the prediction of loop structure including β-strands and helices is also included.

• Stage III: Approximate Binding Affinity Calculation
The sequences with the top fold specificity values are then run through a computationally rigorous third stage to calculate the approximate binding affinity of the sequences to the target protein. Those peptides with the highest predicted binding affinity to the target peptide are then validated experimentally. Through the stages of this general methodology, the sequence complexity of the problem is reduced in tandem with increased computational complexity. This results in a small number of candidate peptides for experimental validation.

Creative Peptides provides de novo design related services for peptides engineering, including peptides structure prediction, peptides folding and interactions, thermodynamics information, energetic state, stability, etc. If you would like Creative peptides to help you in designing your peptide, our technical support department can assist you.